Your privacy is important to us
Sluurpy and its trusted partners use cookies and other technologies to increase site security, to improve and personalize your experience, and to show personalized ads on their site and other sites.
For more details, see the Privacy and Cookie Policy. 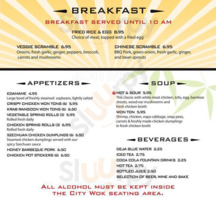 Find the best restaurant in Denver

Book a table with

Nw
+3.5
Food was cooked fresh to order and tasted like it. Other than the rice, everything was cooked really well, especially the meat. This place is disproportionately popular compared to other places in the adjacent food court, and even though they do a good job of churning out the orders, I wouldn't eat here if I was pressed for time between flights.
Dec 18, 2017

Candace Nelson
+3.5
We just talked a lot about Austin, but guess what? I made another trip not too long ago over to Seattle So, I'll talk a little bit about some of the great food I got to try there.But, first, we had to get there. Our flight had a layover in Denver, so I made a beeline for the food court area. The first thing that caught my attention? City Wok. City Wok has some basics, so I went basic with sweet and sour chicken, as well as an order of Krab Rangoon Won Tons. These wontons were decent - not super crispy, inside was pretty average.Same could be said for the main entree. It was just kinda neither here nor there. A little more flavor would've been nice in the sauce. But, not bad. Just pretty middle of the road. I suppose that's what's expected from airport food. But now I can say I (kinda) ate in Denver! Grade: C
Jun 30, 2017

Our aggregate rating, “Sluurpometro”, is 70 based on 705 parameters and reviews